Ectoparasites are those that live on the outside of a host and consume the host’s blood, skin or hair as a source of food. They can cause discomfort and secondary infections. Summertime in Montana is generally the most common time of year for pets to become infected with external parasites; however, the problem varies seasonally from year-to-year, sometimes starting early in the spring or lasting late into the fall.

Fleas are wingless insects that live on the blood of a host. They are very small and move quickly by jumping. This can make it difficult to see them in the early stages of pet infestation and so we look for other signs like scratching, red skin, scabs and ‘flea dirt’ – it looks like dirt at first glance but is actually the excrement that the fleas leave behind. Our pets get fleas from other animals with fleas; it could be spread from a feral cat, a neighbors’ dog or from wildlife – raccoons, rabbits, or deer. While fleas prefer to live on our pets, they can still bite humans and infest our homes. Once heavily infested, it can be challenging to eradicate and often requires several treatments of the infected pet and environment to completely disrupt the life-cycle of the resilient flea. Fortunately there are several modern products available that are safe and effective at preventing a flea infestation. It should be noted that cats and dogs have products specifically designed to be safe for their particular species. Cats can get severe toxicity from exposure to flea treatment designed for dogs and rabbits can be fatally harmed if the wrong flea treatment is used. 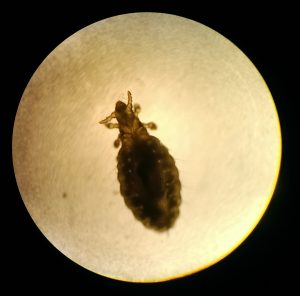 Lice is a parasitic insect that are species specific, which means dogs can only get lice from another infected dog and cats can only get lice from another infected cat; lice that infect dogs and cats are not the same species as human head-lice and cannot be transferred to us from our pets. Lice are about the same size as a flea but unlike fleas, canine and feline lice move very slowly. This means they do not easily transfer from host to host, but transmission can still occur through direct contact or shared inanimate objects (fomites), such as grooming tools. Itching or chewing is a typical sign that a pet may be infected. Treatment of lice is generally very easy but requires a follow-up treatment to ensure that the life-cycle is terminated. 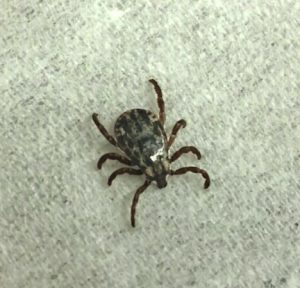 Ticks are more closely related to spiders than insects. They feed on the blood of a host animal. They are usually found in low shrubs or grass and are transferred to anyone brushing past them. They aren’t necessarily spread through direct contact and can survive in the environment for a long time without feeding. We see them more commonly on dogs than cats since cats are incessant self-groomers. Ticks don’t necessarily cause itching so we rely on inspection, which can be challenging on long-haired animals. Since ticks are drawn to hidden areas of the body, the first places to inspect are ears, armpits, toes and groin. If you find a tick on your pet, it should be removed gently with tweezers by pulling slowly and steadily away from the skin to encourage the tick to back out of the skin. If the tick’s head is left in the skin, it needs to be removed to make sure the area doesn’t get infected. Ticks have the potential of spreading harmful diseases that affect us and our pets. The good news is that many of the products that prevent fleas are also effective at preventing ticks from choosing our pets as hosts.

Mange is a skin disease caused by mites, a microscopic parasite. There are three types of mange that we see on pets in our area: sarcoptic mange, demodectic mange and otodectic mange. It is important to differentiate them since they require different treatments.

Sarcoptic mange is a caused by a mite that burrows under the skin. It causes intense itching and chewing. If untreated, the skin may eventually become thick and dark. It is highly contagious to other animals and can be transferred to humans, causing a skin condition called scabies. The mites cannot complete their life cycle on humans so treating the animal will resolve the human scabies. We look at skin scrapings under the microscope to confirm the presence of the sarcoptic mite.

Demodectic mange, also known as demodex, is caused by a different type of mite that lives in the hair follicles of affected animals. These mites live naturally on the skin and as long as the body’s immune system is healthy, they cause no harm. Young animals with developing immune systems and immune-compromised adult animals are most susceptible. Since this mite is found naturally on the skin of many animals (including humans), exposure of a healthy animal is not considered harmful. This mite does not typically cause itching so we look for hair loss around the eyes and face or other localized areas of the body to identify the condition.

Otodectic mange is better known as the ear mite. They live mostly in the ear canal of an infected animal. The primary symptoms include itching, shaking head and build-up of a thick, dark residue in the ear. These are also the symptoms for other types of ear infections so it is important to examine an ear swab under the microscope to identify the mites. Ear mites from pets can temporarily hang out on humans but do not survive for long or cause us long term problems.

Over-the-counter treatment of the different types of mange is often unsuccessful in part because of the untrained and incorrect diagnosis of well-meaning pet owners but also because the types of products available without a veterinary prescription are lacking in efficacy. In the case of mange, it really is safest and most cost-effective to seek professional veterinary advice.

“Ringworm” is a bit of a misnomer since it is a skin disease caused by a fungus and has nothing to do with a worm. The fungi invade hair follicles making them brittle and prone to breaking. This causes ring-shaped areas of hair loss. Transmission can occur through direct or indirect contact and the spores can survive for a time on inanimate objects in the environment. Ringworm can be transmitted to humans and children seem to be more susceptible than adults. Some species of the fungus will fluoresce under a UV light, but the most accurate diagnosis is made by sending a hair sample to a lab where they place the hair in a special medium to check for fungal growth. This process may take up to 3 weeks to get a result so we generally begin treatment based on the appearance of the skin lesions. The treatment of choice depends on the severity of infection, the number of pets and whether there are children involved.

Font Resize
Contrast
Accessibility by WAH
Call Us Text Us